There is a box, a fairly plain box. People have wanted me to live in that box for my entire life – even other people, who look or have looked like me.
I can’t fully explain how angry I get every time I see a show highlighting the life of a fat person* (pre, post or without any kind of makeover), crying about what they’ve never accomplished and eating their way into oblivion. They typically look like hygiene isn’t a high priority, are un- or under-educated, unaware of any other type of personally amazing trait(s) they may possess and seemingly devoid of any personality. Shows highlight, in many cases, larger people with no pride and no value. They highlight what’s comfortable to the rest of the viewing world.

I feel like these things all characterize the box society wanted me to be in for the majority of my life – especially at my heaviest – and that the “box” also explains why people have had such a violent reaction to me (and other people like me), in particular.

The box is where all fat (or inferior) people are supposed to live.

Ironically, I have never fit the box and know that I have offended the hell out of people simply for being so many of the things normal(acceptable)-sized society thinks it should be: smart, witty, immaculately put together, educated, well-liked and very aware of my worth. Whenever someone has appraised me head to toe and a small little smile or look of disgust played at their lips, I have been able to read their minds: how dare she? Yes, how dare she try to be like the rest of us? She doesn’t deserve to be LIKE US.

My sociologist brain often drifts to Karl Marx. According to Marx, society is defined by conflict and a fixed group (men and women and everyone in between) possess capital while others do not. Conflict theory is a theory centered on control. Projecting this theory to things beyond economic systems (i.e. control by the wealthy over the poor), the horrible and not-so-horrible-yet-still-mentally-afflicted-by-size thin or normal-sized people have always said to me (with their looks as well as words and actions): you should NOT possess the things I possess. You are not worthy of the (very) things that assign me value in this society. You are, in fact, beneath me.

In short, for years, I have offended peoples’ material understanding of the world. When and if they go beyond what they see (or are forced to), they often also find out that I have a huge circle of friends and family, excel in my field, or (surprise) that I have many talents a la writing. Thanks to Sam and DJ, I’m also attractive. These realities generally piss people off even more. No, I haven’t been lying in bed, downing value-sized fast food meals (again, a too-convenient portrayal of larger people on reality shows) and squandering life away. Small glances have conveyed tiny bits and pieces of this offended behavior. Lingering ones have told me a much larger story about the person on the other end. And, if that person has chosen to go to the extent of making a negative comment (directly or indirectly; and they have, many times over) to or about me, I know they’ve done this in an attempt to control me. They’ve done this in an attempt to sentence me back to THE(IR) BOX. It’s been so important that I be diminished, that I melt into some mercurial shape and find my way back to my square, that they’ve been willing to cut the air with their unsolicited words (“advice”, commentary, snide remarks) to put me there.

I want to share that there’s a whole segment of society, ironically a growing segment, that’s also offended by my being out of the box. When I catch the eye of these people (sadly, it’s almost always women), larger people, I get the same offended impression from their glares: how DARE you? How dare you be stylish, pretty, together, and not a wilted flower? I feel a deeper sense of sadness for this group. This is the group that has accepted the(ir) box. They’ve allowed a finicky and size-intolerant society to shape them and their beliefs. Unfortunately, they usually echo the same sentiment: you (we) don’t deserve this life (non-verbally and otherwise). To me, this group has given over complete control to the thin/normal power elite.

Yes, I have offended people. I have symbolized one of the things people fear becoming most: fat. I am also a loud, living specter of something that – to them – should not exist or flourish by society’s narrow standards. Although the nation’s collective waistband has been expanding for years, the box continues to exist. The box represents control. And it always will for every person that doesn’t fit into the place or space society wants them to occupy. Unfounded prejudice and judgment of any kind is a red flag, to me, of personal fear (and extends well beyond size) or personal loathing. Imagine how much more powerful we would be, generally, if we were more concerned about educational reform or closing the wealth gap as opposed to expending the energy to cast aspersions on complete strangers. Or ourselves.

I feel lucky to have never been molded into society’s given square. To the historical and future naysayers, my shape is pear – not box.

* This is not a comment on any actual person; it is a comment on the continued interpretation of “the” fat experience in an attempt (in my estimation) to attract a viewership of the masses who want to believe in one experience. 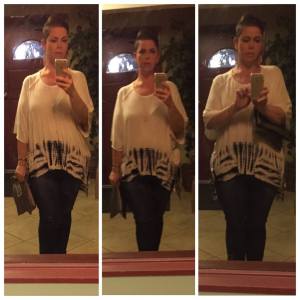